What shocked you in ICC Cricket World Cup 2019?

Some of the incidents which shocked me was:

Virat Kohli predicted during the ICC Pre departure captains press conference that this world cup will be dominated by bowlers. He said that he believe matches are going to be tight and low scoring. The interesting part after the world cup is that, it truly happened!!

Both Knock out stages and group stage were dominated by bowlers.

Mitchel Stark also broke the record of most wickets in a world cup.

•India Vs New Zealand was an low scoring thriller.

• The Final was a perfect low scoring thriller. The most closest World Cup Final ever. Both team were tied up even after the Super Over. That is crazy!!

Big appreciation goes to Virat Kohli, his analysis was right.

I mean seriously!? Is that the intent a player playing for a great cricket team should have? What he was doing in the pitch was terrible. He was playing too much defensive which went wrong for India in several occasions. Even his positioning in the team was confusing. If we look at the Indian Cricket Team in the World Cup. We had only 3 player positions as settled when we went for the World Cup, that itself was a draw back. When Rishabh came later he made a settled top 4 but still there was confusion on which number should Dhoni bat. For that confusion only Dhoni was the reason because Dhoni was playing too defensively that the team management always looked confused at where should Dhoni play.

Dhoni's Intent was totally questionable and disappointing at the semi finals against New Zealand. I would say( without the fear of any Dhobians) that Dhoni was the only reason for the dismissal of Ravindra Jadeja. Jadeja was playing beautifully. But, he was not at all getting any support from the other side. All Dhoni did was pressurising Jadeja by increasing the required run rate by playing too defensively. If Jadeja hits some boundaries or six and decreases the required run rate then against Dhoni brings it to the same level by wasting balls.

India was in need of runs with around 12 runs per over and Dhoni was leaving the last ball of the 47th Over. Was he playing test??

Having said that I am not a hater of MS Dhoni. I think he deserved to be in the team because the truth is that we didn't had a better choice than him to play in the team.

Even I am a great fan Dhoni but truth is truth.

This guy was having hell lot of luck throughout the tournament. I mean, it went good for India but I swear I never saw a more lucky batsman than Rohit Sharma in the history of World Cup and Cricket. Lots of catches were dropped, easy run outs were missed, Poor field placements were made against him.

I thought this guy might break the record of Sachin Tendulkar of most runs in a single World Cup but he didn't.

India's batting line up was so much unsettled. Indian Cricket had no idea whom they should make play at number 5,6,7. Pandya was great but he used to switch his position around according to the situation. India never had a convinced middle and lower middle order throughout the whole tournament. Number for was the worst nightmare untill the inclusion of Rishabh Pant.

Inability of the batting line up to cop up with the pressure was also horribly visible. The only reason for the defeat against New Zealand was this inability of the batting line up to cop up against pressure. New Zealand developed pressure through right bowling and fielding and India lost their control over the game. They put 3 slips and most of the fielders inside the 30 yard circle and developed the pressure. That was the situation to play sensibly and do attack the bowlers a little bit so that they should pressurised to remove some players from the 30 yard circle to stop runs. But, India became too much defensive which cost them the match and tournament. The inability of the team to chase the total was visible against both South Africa and England.

Now, world cup is a tournament which is highly awaited. The hosting nation is declared too early. So, it might not be possible to assess that early that whether Rain will come as an interference. But, atleast they could have made some better preparations. Rain affected lot of matches and some of them were even wiped out by it. Even the drainage system was so poor. They had only covers to cover the pitch. The out field was allowed to get wet. Which was causing problems for the batsmen because out field became slow and the ball was not moving properly.

6. Jadeja's inclusion in the team and the influence of him in the team/ Jadeja's fielding stats.

Though Jadeja was in the 15, he had to wait till the last match of Team India against Sri Lanka to get an opportunity in the playing 11. He didn't got to bat against Sri Lanka but his overall contribution in bowling and fielding helped him to be in the Semi final Squad. Then, what happened was what we all know. He performed so well against New Zealand in the Semi final with bat, ball and fielding. He took important wicket of Nicholls. He also successfully made Ross Taylor run out through a direct hit. He also took an awesome catch as well. Then came his legendary batting against New Zealand for Team India. He took India from a position where nobody thought India will even come closer to the victory mark. His 77 of 59 balls definitely imparted believe in the Indian Fans heart. He would have made India win if Dhoni gave him a good support.

Look at the runs saved by Jadeja in the World Cup. He played only 2 matches and did fielding in some of the other matches as a substitute still he is the top run saver.. 7. Giving Six runs to the ball accidentally hit by the bat of Ben Stokes/ Over Throw Controversy

I think, it was the worst decision. Ben stokes while attending for the second run dived to the crease and the throw of Guptil hit the bat of Ben Stokes, then went for boundary That even costed New Zealand a World Cup definitely. It should have only 2 run. I don't know any reason why the batting team was awarded with 4 more runs for the mistake they done. Obstructing the fielding can even be given out. Remember Inzamam Ul Haq was given out against India for defending himself with bat while he was outside the crease.

But this Stokes case was definitely not supposed to be out but at the same time it was no way a 6 runs. It should be only 2 runs. The poor umpiring definitely took world cup dreams away from them. But what can we expect from umpires like Kumar Dharmasena.

8. Virat Kohli's Failure in scoring even a single Ton

It was shocking for fans from everywhere to see Virat Kohli failing to score even a single Century in the World Cup. He played 9 matches( not considering India Vs New Zealand group stage match which was completely rained off) in the World Cup and scored 5 half centuries consequently. He is a player known for capitalising fifties to hundreds but his failure to score even one century in the tournament was something which was hard to digest for the fans.

He proved why he is considered as the best all-rounder. What a performance with both bat and ball especially with the bat. He was absolutely unbelievable throughout the tournament.

He was the 3rd highest run getter of the tournament with 606 runs from just 8 matches he played. Considering he is an all rounder it is an unbelievable stat.

10. Indians saying that they lose the match when Dhoni got run out.

Are you people serious?? We actually lost the match when Ravindra Jadeja got out. Just look at the way Dhoni was playing when he already had support at the another end as Ravindra Jadeja. Dhoni was playing too slowly increasing too much pressure to Jadeja to score the runs of both the batsmen should score together. In such a stage Dhoni was the one who should have sacrificed. As a batsman it was Dhoni's responsibility to take control of the game and hit big shots but what he did was pressurising Jadeja. When he can't perform with support, how you people expect him to be performing well with Bhuveneshwar Kumar at the opposite side? Atleast, get out of this illusion that Dhoni can win you high pressure matches like in the past.

India completely lost the hold on the match when Ravindra Jadeja was out.

And now, England became Champions of the world Cup hosted by them. PREV
What are some of the most unbelievable and amazing cricket facts?
NEXT
Who is the luckiest cricketer ever and why? 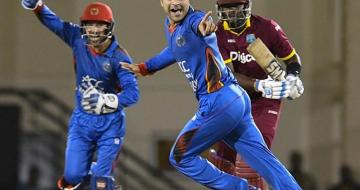 Cricket World Cup 2019 Qualifiers: Who will go to England next summer?

WHICH TWO TEAM WILL MAKE PLACE IN 2019 WORLD CUP

If you're a cricket…